Mum of MUCUS (with the mildly helpful gadgets)

Life as a parent is all about tackling novel challenges, and last week I got to experience being a mum of Multiple Unhappy Children Unleashing Snot (or MUCUS, if you will) for the very first time. It all began when summer finally ended (yes!), Lara went back to pre-school (YES!) and promptly came home with the start-of-term lurgy (NOOOOO!) All I can say is that at least this illness didn’t involve the gastrointestinal bodily fluids of last term’s ailment. No, as colds go this one was mild, her temperature never got past the warmer side of 37.5 and, aside from an irritatingly persistent mental block against the act of blowing one’s nose, our pre-schooler emerged unscathed a few days later.

Husband didn’t catch it. I didn’t catch it. I thought, with the naïvety of only ever having cared for one small person at a time, that my super-fat breastmilk (not to toot my own horn but the child could smuggle walnuts in those cheeks of hers) would protect Baby 2 from catching it. Turns out, that theory only really pans out if the feeder has the cold and the ensuing antibodies, which of course I did not. And, being a mum of the Insta-Facebook-boast generation, I’ve never discouraged those cutesy photo op moments when their heads are smooshed close together and neither one is grimacing. Of course she caught the cold.

I knew it was all too good to last. The two hour naps. The newfound ability to sleep for six or even seven hours at a time (not every night, I hasten to add). At first I thought it was a(nother) growth spurt… Then the snot began to flow in entirely disproportionate ratio to the size of the nose producing it. I had forgotten just how pitiful the mewling of a mucus-filled infant lacking the ability to breathe properly could sound. I hate it when I can’t sleep properly because my nose is stuffed up. For a baby who doesn’t yet realise she can actually breathe through her mouth as well the experience must be all kinds of scary new torture. No wonder the poor little scrap woke every hour or so in a panic. And yes, there are the mildly helpful gadgets to offer some relief – the saline drops, the humidifiers, the chest rub, the nose-sucker-outerers*. I say mildly helpful because any small comfort is almost instantly evaporated when your child breathes in, smiles for exactly one second and then sneezes, unleashing a whole new nose-full of misery. Ultimately, as with almost every hurdle one faces with small babies, the only real fix-it is time and patience. 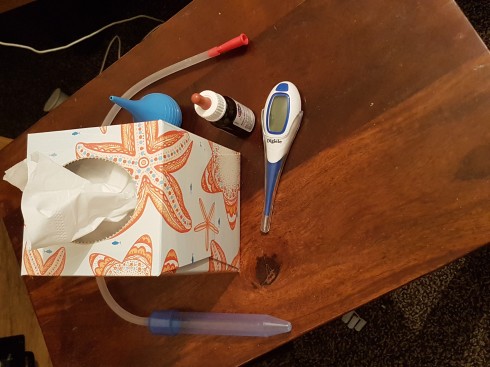 Yep, the red bit goes in your mouth…

The websites say it can last a week or more. Luckily we only had a handful of bad nights and, though the snot is still far more of a present feature than one would like it to be in one’s household, normal service has resumed and both children seem to be well on their way to recovery now.

That just better not be a tickle I can feel in my throat.

*What you see here is the NoseFrida, which is not, in fact, a stern respiratory nurse of vague Eastern European descent beaten down by the damn patriarchy but still ruthlessly passionate about extracting mucus from small babies, but a device for clearing tiny nostrils using an entirely disgusting-sounding-but-surprisingly-effectual-and-hygienic method. Google it. If you dare.

Author, mum, sometimes journalist. I live in Berkshire with my husband (Hub), three kids (B1, 2 and 3) and two fairly indifferent cats. My debut novel, The Girl with the Green Eyes, to be published by Bad Press Ink on November 5, 2021. Find out more here: www.jmbriscoe.co.uk. END_OF_DOCUMENT_TOKEN_TO_BE_REPLACED
This entry was posted on Tuesday, September 26th, 2017 at 11:00 am and tagged with a little song of sickness, baby illness, baby with cold, childhood illness, ill children, school sickness, two children with colds and posted in Age, babies, being a parent, breastfeeding, family, feeding a baby, having a baby, ill baby, illness, mess, parenthood, second child, sorry parents, stern baby, Thighs. You can follow any responses to this entry through the RSS 2.0 feed.
« The night is dark and full of nappies…
The journey to innocence »